So I have been a wee bit busy lately with a wee project that I hope will grow to be not so wee.
This will take a few years to get on its feet and of course I want to do a good job which takes some time in preparation of how to best benefit the local community in Bodhgaya. So no rush, have lots of research to do but I wanted to share this news and get your feedback and or ideas.

The Noble Heart Charitable Trust is based in Bodhgaya, India. The plan is to have a small meditation/yoga retreat center from which funds will be put into the community in the form of family and health education. income generation and environmental awareness.  The trust plans to work with the local community to improve their living situation. Anyway it is a small but sincere start and hopeful it will be well received and benefit those involved. If you have any ideas please do let me know.
I have to also say a huge huge Thank You to all involved in the creation of the trust for their time, effort, expertease and resources!


Have a wee look at the FB page and like it

http://www.facebook.com/NobleheartCharitableTrust?fref=ts
Posted by Linda at 5:14 AM No comments:

Teaching with His Holiness the 14th Dalai Lama in McLeod Ganj

June 1st -4th His Holiness taught on Shantidevas text the A Guide to the Bodhisattvas Way of Life.

The teaching was sponsored by the ever growing Indian Buddhist community.
The following link gives the recorded webcast of the teaching;
http://www.dalailama.com/webcasts/post/286-a-guide-to-the-bodhisattvas-way-of-life---dharamsala-june-2013

The text itself, which is a buide on how to develop compassion and wisdom can be found at;
http://www.amazon.com/Guide-Bodhisattvas-Way-Life-Santideva/dp/8185102597/ref=sr_1_3?s=books&ie=UTF8&qid=1370522408&sr=1-3&keywords=guide+to+the+bodhisattvas+way+of+life 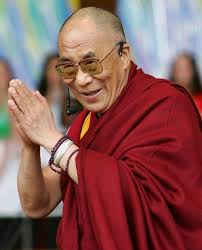 Thousand of people attended and the temple was packed full. His Holiness was in great health and gave a wonderful teaching. As he walked from his residence to the temple he stopped to talk with people, shake hands, play with kids and was just so open and loving with the crowd. It was such a pleasure to see everyone so happy in his presence.

He is only here in India for a few days before he heads off to Australia. Hard to believe he is 77 years old and able to keep up such a hectic teaching schedule, such is the kindness of the lama. We are truly blessed to have such a great person on this planet, or as Lobsang says;
"His Holiness is the 8th wonder of the world."


Today I was also looking at this web site which has been inspired by His Holiness so thought I would share it with you. http://charterforcompassion.org/
Posted by Linda at 5:58 AM No comments: 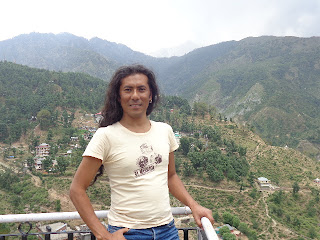 After Buddha Janti it was time to head for the cooler climates of the hills, back to McLeod Ganj. The home in exile of  His Holiness the Dalai Lama and thousands of refugee and Indian born Tibetans. This once tiny village is now a small city which  teeters on top of a hill, at the foothills of the Himalayas. As the world embraced His Holiness, more and more people have flocked to McLeod Ganj and it has been fondly  re-named  Little Lhasa of India.

I first met Losang back in 1996 on my visit to McLeod. Lobsang is not only well know in town for his good looks and charm but mostly  for his tireless work to let the world know about political situation and occupation of Tibet as well as the plight of the Tibetan people inside and outside of Tibet. Unlike most of the young Tibetan boys and men in town who chase or court female tourist in the hope of a getting visa to the west, Lobsang has no desire to leave the Tibetan community in exile. He feels he can work more effectively to raise awareness of Tibet issues with the people who visit McLeod  and have connections to the Tibetans. He also works with the Tibetan people to raise their awareness of global issues and international events as he feels Tibetans need to open their perspective of the world and even support or collaborate with other peoples facing occupation and persecution. While not full on political, Lobsang has come up with uniuque and interesting ways to get information on Tibet into the mainstream news and society. For example,to protest the 2008 Olympics in China, Lobsang decided to hold the Tibet Olympics at the Tibetan Children's Village. The event was not only successful but the advertising alone made people speak out more against Chinese occupation of Tibet. To keep people informed Lobsang updates his a news paper web site everyday with global events and has well over 2000 readers a day. Check it out at;  http://www.tibetsun.com

Lobsang also enjoys promoting Tibetan culture and often attempts to modernize Tibetan culture with various events such as film festival and music concerts;
http://www.freespiritfilmfestival.com.
http://www.musictibet.com
His most successful event is the Miss Tibet pageant which has grown in popularity over the years.
More info on Miss Tibet here is the link;  http://www.misstibet.com

Lobsang present undertaking is to help promote McLeod Ganj itself, complete with events, volunteering  opportunities, courses on every thing from meditation to cooking classes as well as all the info you could want on hotels and restaurants. This is a huge project but Lobsang is loving his new self imposed task and believes it will help not only local businesses to grow and become more professional but inform so many weary travellers and Dharma investigators who come to this city on the hill.
Check out Lobasang new web site on McLeod Ganj at;
http://www.mcleodganj.com

Thanks Lobsang for all you work over the years and I wish you all the best and every success in the future. 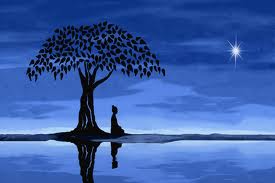 May  25th was the day of Buddhas enlightenment I was in Bodhgaya for the celebrations and it was crazy busy. The Indians call this day Buddhas birthday, even though the Buddha was born, died and got enlightened on the same day, the Tibetans celebrate his enlightenment, while the Indians who always love a good party with all the glitz and glam, celebrate this day as his birthday. May is also the wedding season in Bodhgaya so we had about 5 weddings in town every weekend which in India means 3 days of very loud dance music all night long. I am positive the Buddha would never have gotten enlightened if they had loud speakers in his day.

The story goes that the Buddha sat down under the Bodhi tree at sunset and made a strong resolved to not move until he attained enlightenment. After a night of wrestling with his inner demons of temptation and anger he gained full enlightenment at dawn. So the practice of sitting under the tree on the same night Buddha attained enlightenment is a thing that many Buddhist aspire to do, so I had to have a go.
I have imagined sitting peacefully under the tree with people from all over the world, hahahhah well this is India and no way was that going to happen. The Sri Lankans had a loud speaker for their recitation of texts and the Thaïs their loud speaker for chanting and the India’s had 50 children they were telling the story of Buddha too. There was not a vacant space under the tree as a group of Vietnamese were camping out with mosquito nets, mattresses and had all their stuff spread everywhere and their monks were chanting in Vietnamese. Oh and there was also the crazy lone Japanese monk chanting his own version of Buddhism complete with his portable alter of all kinds of stuff he found in the street. So with 5 languages all at once, it was a huge competition to see which nation/culture could be more Buddhist. Then there was me the only white person in the bunch and the only one that was more than just a wee bit upset at all the noise.  Asians are not bothered by noise and can meditate or sleep no problem with noise, in strong light, in cramped spaces, no problem. When I watched the pilgrims sitting around the monks with the microphones they were either falling asleep, not listening and spacing out, not reciting, they would get up and wander around or just sit and gossip. Geeze if you’re going to make such a noise chanting yi would think they would at least pay attention! 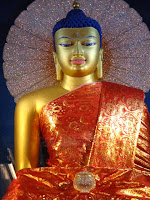 Anyway; I did attempt to emulate the master. I tried to still my mind in meditation but failed miserably; I did walking meditation but it was kind of hard when the school kids story time ended and their play time began; I contemplate human suffering while gazing at the Bodhi tree under the light of the full moon and three spotlights but again gave up when the stray dogs decided to use me as their play toy; so with earplugs and blind fold I tried to sleep, but again, at least for me, there was no inner peace to be attained that night. By 1am it was clearly time for me to go home, but the watchmen lock us in and armed guards prowl the boundary wall for added protection to the mediators. Lucky though again this is India and the guards with guns were asleep in their barracks. I begged the watchmen to open the gate but no way, they would not budge, a rule was a rule and this must be the only rule in India that does not get broken. So longing for my quiet bedroom and determined to get home I told the watched I was going to jump the area of wall into the market where no armed guard patrolled. I have known the watchmen for a long time so they just smiled under their big moustaches and said “oh Linda Gee” as they literally turned their heads the other way; so off I went. 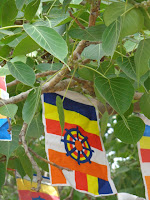 I decided to escape from the very place Buddhist flock to, the famed place of peace, the place I love to be!? Weird but for my own sanity I had to get away for these loud Buddhist!?  I thought; what would the Buddha do here and what would he think of my escape? I consoled myself with the thought that he also left society for a quiet place and I am sure he would just have laughed as much as anyone else at my escapes. So no worries. Commando style with my bag on my back and folded mosquito tent over one shoulder I climbed the gate into the meditation park and ran over to the perimeter brick wall. Bags off I ran up and down the wall in search of a spot that I could get up on to and which was not too far to jump down on the other side. Found it; but I had to walk along the top of the wall for a few feet. Ok Bags over the wall and up I went. I peeped around to make sure no-one was around, the coast was clear; up I went, walked along the top and jumped down the other side. YEH!  All the time thinking to myself; I am 49 years old, not a school kid, I can’t remember the last time I jumped a wall. Luckily the market was empty just a few cows sleeping and dog roaming around. Relieved to be out I sprinted home to bed. So much for my steadfast determination to endure all hardships and gain enlightenment that night.
Posted by Linda at 4:23 AM No comments: 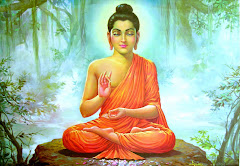